The mayor then asked for council approval of the minutes from December 3rd, regular Alcester City Council Meeting and December 10th special Alcester City Council meetings.  Councilman David Larsen moved to approve the minutes of both meetings without any additions or corrections with a second to the motion from Councilwoman Darla Reppe, council voted unanimously to approve the motion.

Input-I had and I did.  First up was my commentary on ‘professionalism’ in the finance office and FO Pat’s ‘cost cutting’.  Prior to the January 7, 2019, meeting I distributed photocopies of a September 20, 2018, three page letter authored by Finance Office Jurrens sent to the Office of the South Dakota Hearing examiners defending herself against my complaint she violated open records to the table placements of the Alcester City Council. What was interesting is according to FO Jurrens, “…Ms. Larsen questions my (FO Pat) qualifications to competently do the job as City Finance Officer.  I am a graduate of the University of South Dakota, Beacon School of Business with a Bachelor of Science in Business Administration and Accountancy…I am knowledgeable of Government Accounting, Financial States and operation QuickBooks…”  Folks this is a letter to the Office of South Dakota Hearing Examiners by a representative of Alcester City.  I pointed out to the council the use of letter head for all three pages. 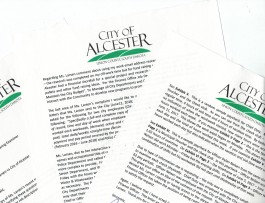 Folks please note, there are no page numbers to distinguish the page order, the lack of title for Chief Hearing Examiner Duenwald and the familiar use of comma in a formal business letter plus numerous grammatical errors most high school students learn to avoid when they are crafting a term paper.  Folks if I used a red pencil to mark the errors I would have run out of red graphite.  In addition even if I did not have a BA degree from Northern I learned as a sophomore in my high school Secretarial Science Course, one only uses letter head for the first page, uses page numbers and uses footers in a formal letter.

I researched the USD Beacon School of Business, I couldn’t find it.  Then I noticed there was a BEACOM School of Business, not Beacon.  Really such an exemplary honors student does not know her alma mater Beacom from Beacon?  Evidently one can see the ‘light’ and one is left in the grammatical dark.

On to page 2 of the September 20, 2018, letter to the South Dakota Office of Hearing Examiners where FO Pat says, “…Regarding Ms. Larsen comment about using my work email address researching something on Pinterest-the research was completed on my off-work time but for fund raising projects for the City.  The City of Alcester had a financial shortfall for a special project and research was conducted for ideas to re-use pallets and other fund raising ideas…”    FO Pat writes the research was completed, so when was it started?   Fund Raising?  Really Fund Raising?  FO Pat the good citizens of Alcester DID NOT hire you to organize bake sales, given lessons in Pinterest pallet art con termites nor your rampant Conflict of Interest position as Chamber of Commerce President!  You, yourself crow you are proficient in Government Accounting, Financial Statements and operating QuickBooks  Accounting Software.  How is it the City of Alcester even developed a financial shortfall for a special project under YOUR professed proficient Accounting and Financial prowess?  Who ‘creates’ the budget out of the erratic mumblings of Mayor Concrete Google Master?  Granted the council gives their okie dokie but their okie dokie is predicated on your so-called ‘expertise’.  But I have to hand it to ya Madame FO, you seem to be adapting yourself to taxing Peter to fund Pat!

Going on to my FOIA request for an accounting for work hours, on call hours, over-time hours of two members of the police force.  FO Pat further states in her September 20, 2018, letter to the South Dakota Office of Hearing Examiners that, “ … each letter (my FOIA) asks for a full and complete copy of…total hours worked…active…on-call…salary…total over-time earnings…date of payment…” going on to explain to the Office of Hearing Examiners that, “…Ms. Larsen, due to her interaction with the Police Department is aware of names…I personally witnessed her interaction with each member of our Police Department and called them by name…Another reason a physical examination of the weekly timecard is necessary…This is not information that can be run in a report from the TimeClock Software…”  REALLY?

She witnessed my interaction with each member of the Police Department, HOW does FO Pat get anything done if she has our police department under surveillance to see when I talk to them. These particular employees ‘punched’ in for work on their cell phones.  No time cards!  The software should have the ability to create a report of hours, type of hours and rates of pay, and etc.  In addition QuickBooks the accounting program used by the City of Alcester, is the same QB program I use it in my business.  I am able to create wage reports in QuickBooks and I didn’t work for a ‘software’ company hawking QuickBooks.

In addition to the FO Pat’s answer to OHE File Number PRR 18-03 Larsen vs. City of Alcester, I provided a list of questions I verbally posed to the City Council.  I have started following this procedure so I don’t forget my questions, the council can read my questions and I can get answers instead of the usual mayoral shrug-off.

WHERE IS THE STREET MAINTENANCE FEE MONEY NOT USED FOR CHIP SEAL? (2018)

HOW MUCH CHIP SEAL WILL THE RESIDENTS GET NEXT YEAR FOR THEIR TWO YEARS WORTH OF FEES?

WHERE IS THE FLOW DETAIL ON THE DONATION RECEIVED BY THE CITY OF ALCESTER FROM THE CANTON BARN FUNDRAISER FOR THE BENEFIT OF THE VICTIMS OF THE ALCESTER NURSING HOME CRASH?

WHAT IS THE OUTCOME OF THE CURB VANDALIZATION ON ANDERSON STREET ALONG THE NORTH JOHNSON PROPERTY?

HAS THE REPAIR OF THAT CURB BEEN EFFECTED AND PAID FOR BY THOSE WHO RIPPED OUT THE CURB?  CITATION ISSUE?

Going on down the agenda:

10. Ordinance changes regarding Cats-No action ’cause the humane folks do not take feral cats just our Fluffy’s.

11. Ordinance change Appointed Officers (2019-01)-Still a ‘work in progress’.  This ordinance change is to all intents a purposes change FO Pat from an appointed position to a hired position.  Evidently she doesn’t want done to her what Rick Johnson did to her predecessor Mike Kezar, where Mayor Johnson declined to ‘appoint 30 year veteran Finance Officer Kezar and where then Councilwoman Jurrens cast her ‘bye-bye’ to remove Mr. Kezar.  Evidently FO Pat recognized Karma when she spotted it comin’ at her at raceway speeds and tryin’ to take evasive actions.  The council also discussed the verbiage used to terminate or fire a city employee.  This ordinance had its first reading (not on the agenda?).

13.  Nuisance Property Discussion-Mayor Glas’s hobby horse.  He complains about several mattresses in his backyard view.  Really, chuckle, chuckle.  Mayor Glas change the zoning and charge a sizable entertainment tax on those mattresses and apply the income to our street maintenance so we can repair our streets without taxing Peter to Pay FO Pat!  Say you could even make a video and put it up on the city website?  Oh that is right we do not have a website ’cause it is not a priority for FO Pat, however she is still working on those Pinterest pallets for fund raising.  Well now a pallet has been defined as a mattress, so FO Pat could collect those ‘pallets’ for her fund raising efforts.  Shoot she can display them next to the walls where she is hawking paintings in the Alcester City Council Meeting room and put up her sign—Pat’s Pinterest Palace of Paintings and Pre-Used  Poly Pallets.

There was an open session disgust-tion of the Code Enforcement Officer by Mayor Tom Glas and Alcester City Councilman Lance Johnson.

18. (a) Finance Office warrants (bills to be paid)  Unanimous Approval

(b) Resolution for City Fees-Key Fee here is the Finance Office Staff Fee goat rodeo              courtesy of an action initiated by yours truly.  I will discuss this lil’ ‘ol fee in a future          installment.  In addition to the FO staff fee, Golf fees and pool fees were among the            changes.  Unanimous approval.

** my opinion if more than one candidate